I don't hold any grudge against Ruto, says Ngirici

•The woman representative said she contributed to the making and popularising of the party, only for it to be infiltrated by ill-willed people.

•She urged electorates to scrutinise the track records of leaders before electing or re-electing them. 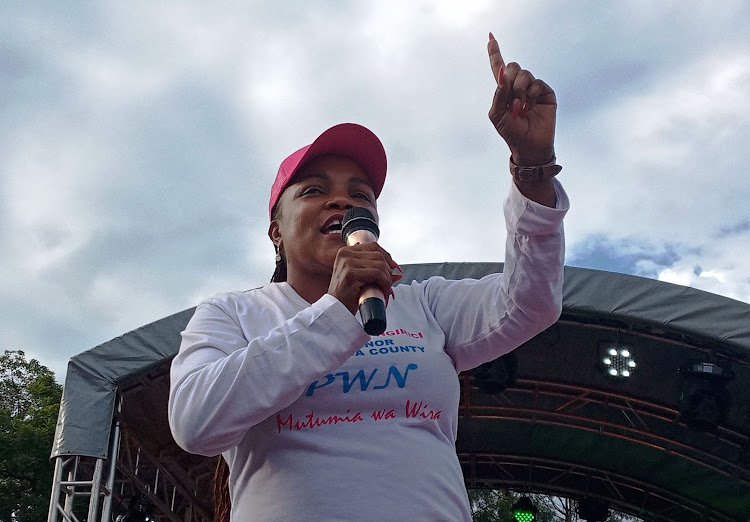 Kirinyaga Woman Representative Wangui Ngirici now says there is no bad blood between her and Deputy President William Ruto.

Ngirici said she does not hold any grudge against Ruto but has a problem with what she termed as the invasion of the UDA party by selfish individuals, "who have no best interest for the party".

The woman representative said she contributed to the making and popularisation of the party, only for it to be infiltrated by "ill-willed people".

“Unfortunately, it all started to fall apart when some questionable characters invaded the party and ruined everything we had worked for,” she said on Saturday in Gichugu.

“Much as I left the party, I don’t have any problem with Ruto and there are those who follow him, which is within their right. Though, I advise you not to follow some of the candidates within the party blindly.”

She urged voters to scrutinise the track records of leaders before electing or re-electing them.

Ngirici cautioned the electorate to be keen when voting in some candidates who she said are hiding under the guise of the party.

She is seeking to unseat Governor Anne Waiguru as an independent candidate.

The Waiguru harsh critic dispelled the notion that independents will not secure funds to serve in their respective elective positions.

Instead, she called out leaders spreading the lie, saying the Constitution gives guidance into the sharing of national revenue irrespective of the political vehicle that a candidate used in securing an elective position.

“There are those who are peddling a lie that independent candidates can’t secure government funds. The law is clear on how the division of revenue should be implemented,” Ngirici said.

If elected as governor, she pledged to work with tea, coffee and dairy farmers to secure better returns.

She said under her current post, she has been at the forefront in defending better pay of coffee farmers who for long have been frustrated by brokers.

In addition, Ngirici pledged to work on county government assigned roads to ease the transportation of goods and residents.

Describing herself as a hardworking woman leader, Ngirici said she had helped in economically empowering 163 groups in Gichugu under the National Government Affirmative Action Fund programme.

Give account of what you've achieved since 2017, Ngirici tells Waiguru

Says Kirinyaga residents have a right to be told how the current administration has utilised their funds.
Counties
1 month ago

Ngirici said that politicians must stop dragging the country back.
Counties
2 months ago

Waiguru to Ngirici: You can't be resourceful as an independent governor

Waiguru said Ngirici feared to face her in the UDA nominations.
Counties
4 months ago
“WATCH: The latest videos from the Star”
by WANGECHI WANG'ONDU
Central
09 May 2022 - 22:00