Says current law is outdated, demotivating and unproductive as it doesn't discourage culprits

Did you know as a plaintiff you can benefit from half the amount fined on a person found guilty of mistreating animals?

This is according to Dr Victor Yamo, a senior official at the world animal protection organisation, who said the law’s intention is to seek protection against animal cruelty.

He however, said that law is becoming outdated, demotivating and unproductive as fines awarded are not discouraging the culprits.

Speaking on Saturday in Kutus, during the World Veterinary Day,Yamo said due to the ineffectiveness of the law, they have resorted to sensitise farmers and owners on how to treat their animals.

“The old law attracts a fine of Sh3,000 thus granting the person who files the case half the amount. With such a law it only means that we have so many violators who don’t feel it’s effectiveness," Yamo said.

"We have decided to create awareness to the masses on how to take care of animals through actualising the universally recognised animal freedoms."

Yamo, however, said all is not lost as government is in the process of setting a new legal framework through the ratification of two new bills that seeks to uphold animal welfare.

He said should the two proposals - welfare and protection bill and animal health bill sail through, there will be a workable mechanism for the advocacy on protection of animals.

He said they hope the bill will be among the first to be debated and passed by the next parliament.

“Many of our legislators are out campaigning so we cannot fast track the bills on protection animals," Yamo said.

He said 75 per cent of diseases encountered can be effectively dealt with if such human resource issues are addressed.

“The county must employ more vets and other animal professionals to not create a conducive environment for healthy  animals," he said.

He called on all farmers and animal owners to treat their animals well by implementing the five major freedoms for animals .

Which are, provision of high quality food and water, spacious clean housing ,frequent vaccination and treatment and provision of a conducive environment. 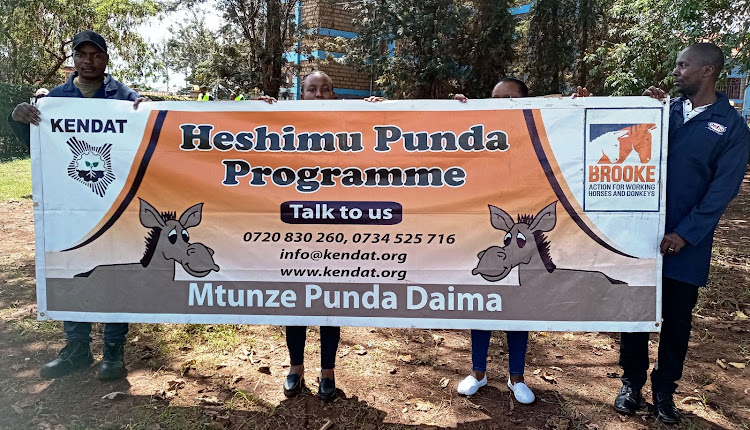 Members from one of the partner organisation that champions for the freedom of donkeys in Kutus on Saturday
Image: WANGECHI WANG'ONDU

No rest for new jumbo mums, they must keep up – study

Elephants need to keep moving to find the amount of food and water they need to survive.
News - Page 7
7 months ago