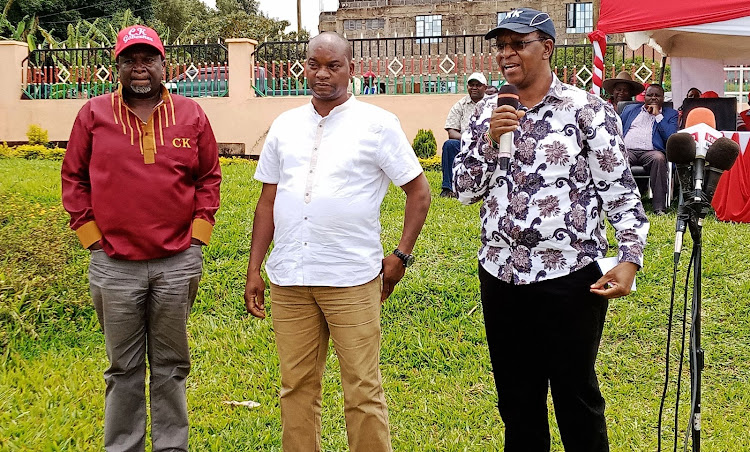 Kirinyaga Senator Charles Kibiru has been handed the Jubilee party ticket to run for governor.

Kibiru got the ticket after Deputy Governor Peter Ndambiri withdrew from the race and backed the senator.

The two were entangled in a standoff for months after they failed to agree on who would be the party’s flagbearer.

“Asante sana (Thank you so much) Jubilee party for the ticket .We will be putting up a strong issue-driven campaign that offer solutions to challenges our people area facing,” the Senator wrote on his Facebook page.

“To my dear people of Kirinayga, I have listened to your voices and I'm taking up the challenge. No doubt our county is yearning for a new way of doing things.We can not perpetually talk of problems. It’s time to focus on problem solving. The month is August. We have a date,” he added.

Ndambiri on Thursday said the misunderstanding had been resolved after negotiations led by the county's eminent persons.

Ndambiri will be Kibiru's running mate.

In addition, he revealed county government ministerial portfolios will be shared equally where he will also be granted the finance docket.

He pledged to work closely with Kibiru for the benefit of the county.

“We both had ambitions to serve the people of Kirinyaga in the position of the governor but after negotiation and guidance from the eminent persons, we finally had a fruitful agreement. We settled to a power sharing deal where positions will be distributed on a fifty-fifty basis.

With regard to the regional imbalance in the distribution of party tickets which for long Ndambiri has decried, the DG assured all was well as that too was also factored in the agreement.

“I can finally heave a sigh of relief because through the negotiations, Mwea will reap what I have consistently fought for, equal representation in leadership. That will be achieved through half of county leadership that will be appointed by the deputy governor.”

Initially Ndambiri was agitating for a direct ticket from the party so as to strike a regional balance in the distribution of tickets. He said the populous Mwea, where he hails from, had been sidelined from among all the other subcounties.

“With what has been settled, Mwea will finally feel at ease, unlike under the present administration where our constituency has been sidelined.”

He decried that Mwea has suffered negligence from the present administration since he fell out with his boss Waiguru.

“The governor has all along considered it fit to run the show solo without my input. Under the new agreement, the deputy governor will equally have a say in the running of the county affairs and the distribution of resources the county receives from the national government.”

He said if deliberations between him and Kibiru fail, eminent persons should intervene.
Counties
2 months ago
“WATCH: The latest videos from the Star”
by WANGECHI WANG'ONDU
Central
01 May 2022 - 22:00