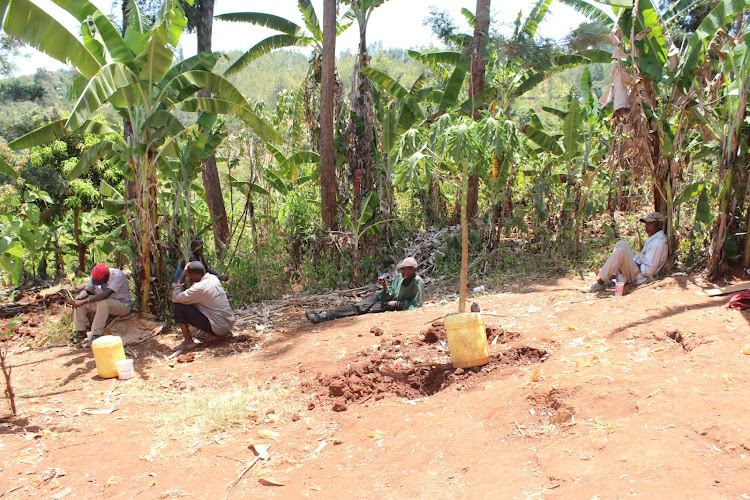 Its 6.30am and as the sun begins to rise, drinking dens in Kiharu, Murang'a, are already thronged with customers waiting to be served.

Gathundia and Ithirianga villages in Mukangu sublocation are the most affected villages in the constituency as residents are ravaged by alcoholism.

Most of the farms in the two neighbouring villages lie bare as men spend their days in drinking dens getting high. Many have lost their lives over the years to the lifestyle.

Women have to do the work themselves, they said, and often times, they are compelled to give up what they earn from their farms to fund men's drinking habit.

Those with farms but are unable to do the work cannot find labour because the men are in the dens drinking.

What bothers residents even more is that the brews that have turned their men into zombies are brewed in five homes well known to them and they can name the brewers.

On February 23, residents congregated at Esther Wanjiru’s home as she buried her 49-year-old son Gidraf Mwangi who had died of an alcohol-related ailment after consuming the brews for over 15 years.

Wanjiru said Mwangi had developed stomach complications over the years, which worsened as he indulged in the local brew known as Matinga and would feed poorly.

About a decade ago, his wife left him, taking away his only child and leaving him under the care of his mother. 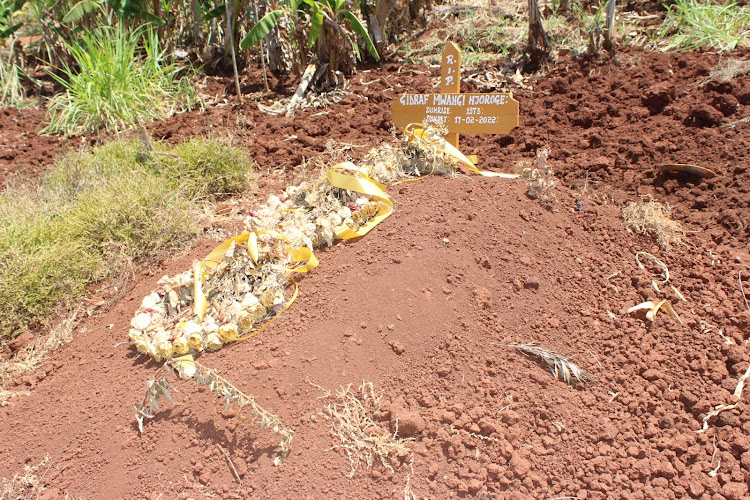 The fresh grave of Gidraf Mwangi who died on February 17 this year.
Image: Alice Waithera

“He was a calm man who hated conflict, and while sober, he was a very good man and would eat well,” she said, expressing her bitterness with the lifestyle he had chosen.

While Mwangi was being buried, the villagers received information that another villager, Benson Njeru, had lost his life.

The 50-year-old had fallen sick during a drinking spree in one of the dens and passed away while receiving first aid treatment in a local health facility.

His wife Alice Nyambura had left him by then. Njeru, who was a mason, did not support her in educating their three children and would ask for the money she got from casual labour and from their farm. She felt hopeless and helpless.

“He called me and said he was sick and needed me but as I boarded a matatu on my way from Kabete to the village, I was informed that he had died,” she said.

He was still drinking when she got married to him in 1993, but it was only the occasional drinking.

The habit however grew worse and saw him sell household items and livestock to finance it. Nyambura said in January he had started coughing blood but refused to seek treatment. 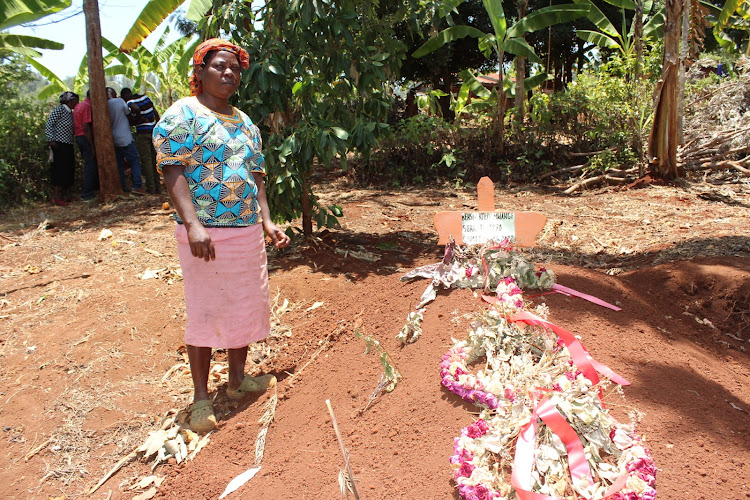 Alice Nyambura at the grave-site of her husband Benson Njeru who died on February 23 after falling sick in one of the drinking dens.
Image: Alice Waithera

But as he was buried two weeks ago, drunk men caused a fracas during the burial as they attempted to conduct a ritual in which they would plant cassava around his grave.

They told shocked mourners that the cassava would feed him when he got hungry but irate residents dispersed them in disgust.

With their graves still fresh, The Star visited one of the homes residents accused of brewing the illicit drink on Wednesday only to find scores of men drinking out in the open.

The compound reeked and was littered with jericans and containers filled with Matinga.

Even after seeing the cameras, the men went on unperturbed, only enquiring why photos of them were being taken.

One of the men was armed with a small pack of black beans and wondered if it was wrong to drink when he had food.

In yet another home, scores of other men were found drinking with some attempting to stagger away with their drinks in their hands when they saw journalists. 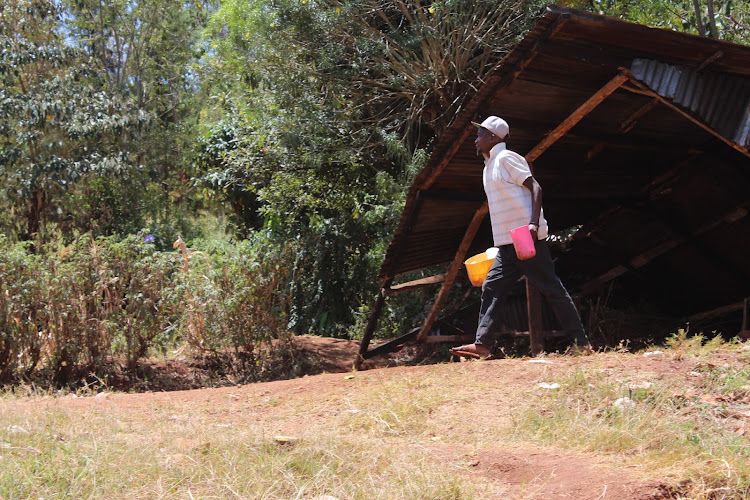 A brew seller rushing to hide some of the brews after journalists stormed his home on March 16, 2022.
Image: Alice Waithera

The sellers quickly hid the drinks in a mud house which residents say has a bed for drunks who get overpowered by the brews. It is in this bed that Njeru fell sick minutes before he died, they said.

Just then, a seemingly teenage boy approached from a neighbouring farm carrying a transparent bucket full of black beans and was surprised to find that the sitting area that was made up of what seemed to be a house’s rooftop bent to the ground was empty.

Residents said the boy sells black beans to the drinking men and is also used by one of brewers to supply brewing materials including jaggery to the other brewers after dropping out of school in Form 2.

Villagers said when alcoholism started in the year 2000, they fought it and started a patrol team to flush out the brewers but gave up as they ended up being released every time they got them arrested.

In another instance, a night patrol ended tragically in the neighbouring Gitige village when armed brewers waylaid elders and hacked four to death bringing their efforts to an end and allowing the vice to freely flourish.

Most of the affected men are aged over 40 years and do not have families as their wives have left them. With no cash, the drunks steal chicken from their neighbours which they sell to raise money for the brews. 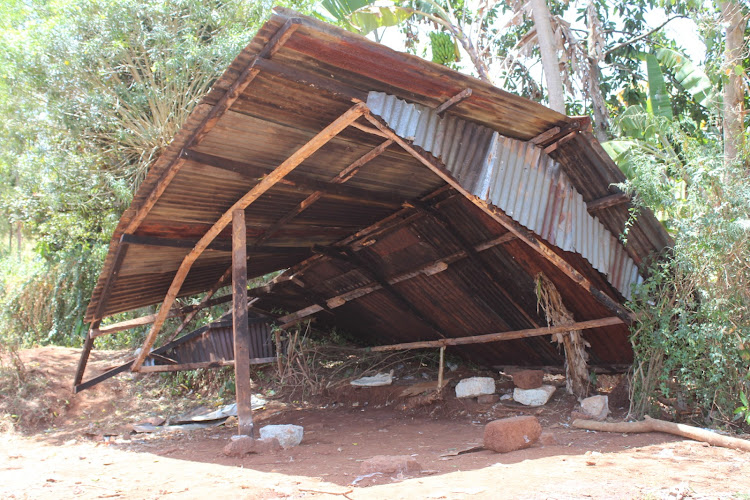 A structure under which men enjoy Matinga brew in one of the five brewing homes in the villages.
Image: Alice Waithera

Elder Nancy Waiyego’s three sons and husband are trapped in alcoholism. They have turned her home into a spectacle as they engage in fights almost daily.

“I have a home but I live like I don’t. I don’t know how I have been able to keep my home together. It is by the grace of God. I pray for my husband to always stay broke because then he can’t drink,” she said.

With the poor quality lives they live, Waiyego said majority of the men engaging in the drinking have one foot in their graves.

In another home, a man brought down his house in order to raise money to drink, leaving him homeless.

“These men should be having children in school but none thinks about marrying or sustaining a family. It’s such a shame,” she said, adding that crackdowns organised by the police yield little fruit as the brewers are tipped off. 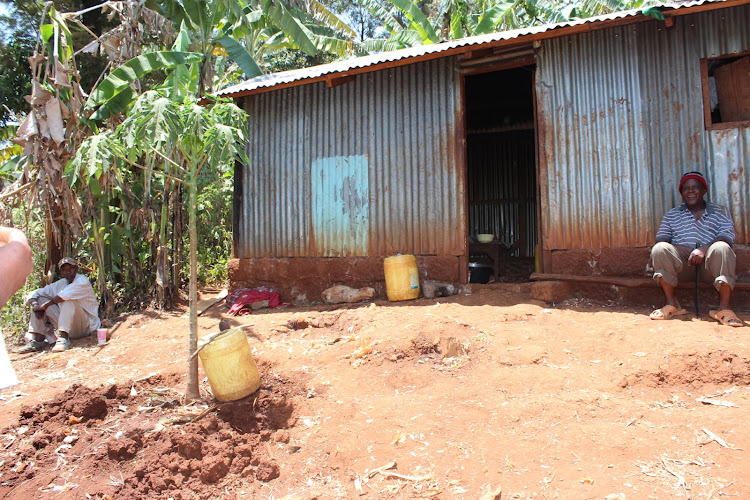 One of the homes accused of making Matinga brews by locals. In the far left, a man enjoys a glass of the brew.
Image: Alice Waithera

This, he said, is because he is afraid for his life and the brewers seem to have connections. The brewers also sell bhang and allow their patrons to engage in gambling poker games, locally known as ‘Kamari’.

The brewing, he said, is done by families who in turn pass the craft down to their children. The area now sees hundreds of men from neighbouring villages stream in search of the brews especially during weekends when the dens are equipped with music systems to entertain them as they drink.

Irungu said he is concerned that the neighbouring Mukangu Primary School has had dwindling enrollments and did not have enough candidates to be certified as an examinations centre. It was merged with Kahuhia Primary School.

The village is dying away, he said, and can only be saved by the government.

“We are ready to work with the government to eradicate these brews but something needs to be done urgently before we bury more of our sons,” he said. 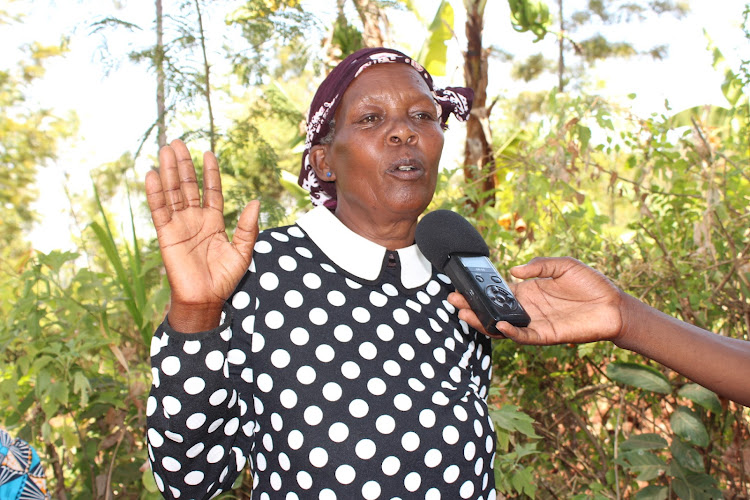 Nancy Waiyego, an elder whose three sons and husbands are affected by alcoholism.
Image: Alice Waithera

Wives have had to take up family leadership while their husbands roam shopping centres for alcohol.
Counties
1 year ago