PS Kibicho rally leaders in drumming up support for Raila

Says in March Kirinyaga will organise a rally with more than 50,000 county residents and invite Raila 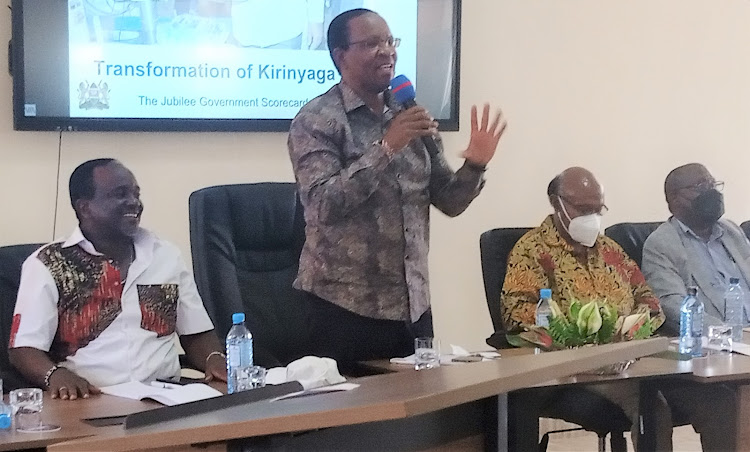 A section of Kirinyaga leaders have pledged to embark on an aggressive grassroots campaigns to market ODM leader Raila Odinga's presidential bid.

The leaders affiliated to the Azimio la Umoja movement said in March they will organise a rally with more than 50,000 county residents and invite Raila as the guest.

Led by Interior Principal secretary Karanja Kibicho,the leaders revealed that during the meeting they will seek to collectively give their terms  and conditions to Raila.

“This will be a consultative rally where we will unanimously present our needs and he should also tell us what is in store for us,” Kibicho said.

Kibicho said, Friday, county leaders would not wait and watch residents being swindled by politicians who don’t have their interests at heart.

“Kirinyaga has owners and we demand respect as we join other Kenyans in asking tough questions to leaders seeking our votes. We shall assess them but are behind Azimio's candidate Raila,” Kibicho said.

The PS further said President Uhuru Kenyatta has his eyes fixed on the Raila as his successor.

He added that he shall stand by Uhuru's decision as he has the best interests for Kenyans.

“Let us all adhere to President Kenyatta’s advice. He understands all characters of who is best suited to succeed him and concerned about Kenyans needs," he said.

"What he will not entertain is leaving the country under the leadership of questionable characters. Therefore, let us listen to his wise counsel.”

Kibicho told off a section of the Kenya kwanza brigade for insulting him and his boss Fred Matiang’i at their political rallies.

‘Matiangi and I are their main subject of discussion in their rallies. If any of their meetings goes without mentioning our names, then they must be in an upbeat mood ," Kibicho said.

"We want to make things easier for them by advising them to record playbacks about us so that they don’t have to repeat themselves every now and then.”

He said some corrupt leaders have since become aggrieved and bitter with them due to their effort in tightening the noose on corruption.

“We protected Sh140 billion from being stolen from our ministry, that is why some leaders with evil intentions are very bitter with us,” he said.

He further urged the public to be cautious of the superficial promises by leaders and instead focus on asking the aspirants tough questions.

He lashed out at the UDA brigade for misinterpreting the bottom-up economic model to the public saying their little knowledge was setting a stage for revolt.

His infrastructure counterpart Paul Maringa said the economic model is currently being practiced in the country since it taps on development and improving leadership in rural areas.

County deputy governor Peter Ndambiri reiterated that Kenyatta is still the undisputed Mt Kenya supremo and as such they will continue adhering to his guidance . 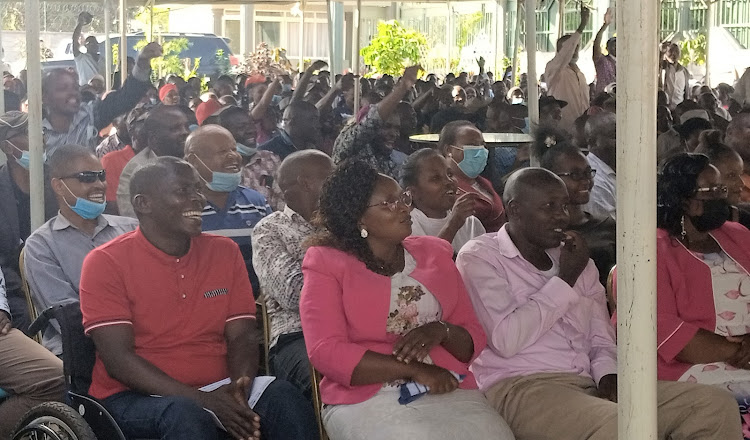 A section of delegates who attended the meeting
Image: WANGECHI WANG'ONDU