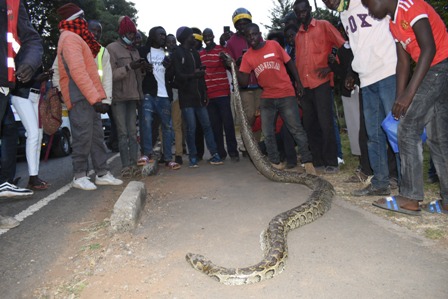 Fear has gripped residents of Githuguya village in Ndia, Kirinyaga county following a sudden increase in pythons in the area.

According to the residents, the snakes are mostly finding their way into their farms and compounds in search of food thus paralysing their day-to-day income generating activities.

They said, as a result, most of them are unable to carry out their farming activities over fears of attack by the deadly serpents.

Wilson Wambugu, a resident, said for some time now, he has encountered the snakes while going about his businesses.

“They have now become a menace as they have increased in numbers. In the last five days, I  have encountered the deadly reptiles as I go to fetch firewood from my farm. It is such a scary experience,” Wambugu said.

Lucy Ndegwa, another resident, said she can no longer access her farm for fear of bumping into a python.

According to her, the few mango trees in her farm have become a safe haven for one of the pythons ever since her neighbour cleared her bushy farm.

Ndegwa said they fear for their children who most of the times have to walk to school unaccompanied.

“It’s horrifying to even think that during this mango season, children can climb up the trees in search of fruits unaware of the imminent danger," Ndegwa added.

"Not so long ago, one of my neighbours found a python on her compound and had to run for safety. They are causing us sleepless nights.”

Another neighbour, Ann Wangare, echoed similar sentiment saying they fear that their livestock will start dwindling in the wake of the python menace.

She said she fears releasing her two calves to graze because they can be attacked anytime.

The residents are now calling on the government to act fast before the serpents can cause havoc.

They also want the government to establish a Kenya Wildlife Service office as many human-wildlife conflict-related cases have been reported from across the county.

“It becomes difficult to rely on the KWS office in Embu as they take time to respond to our concerns. We would like to appeal to the government to establish an office in Kirinyaga county so that our issues can be solved quickly,” another resident said.

MPs stop compensation for attacks by pigs and snake

Bill sought that victims of attacks be compensated within 12 months.
News
4 months ago
by WANGECHI WANG'ONDU
Central
19 January 2022 - 07:00