Ruto caught in the middle as Waiguru, Ngirici fight to control Kirinyaga visit

Both leaders who have been political rivals are eyeing the governor’s seat on the UDA ticket in 2022.

• The bruising political jostling between the two women leaders that has put Kirinyaga into focus, comes after the entry of Waiguru into the UDA camp.

• Both leaders who have been political rivals are eyeing the governor’s seat on the UDA ticket in 2022. 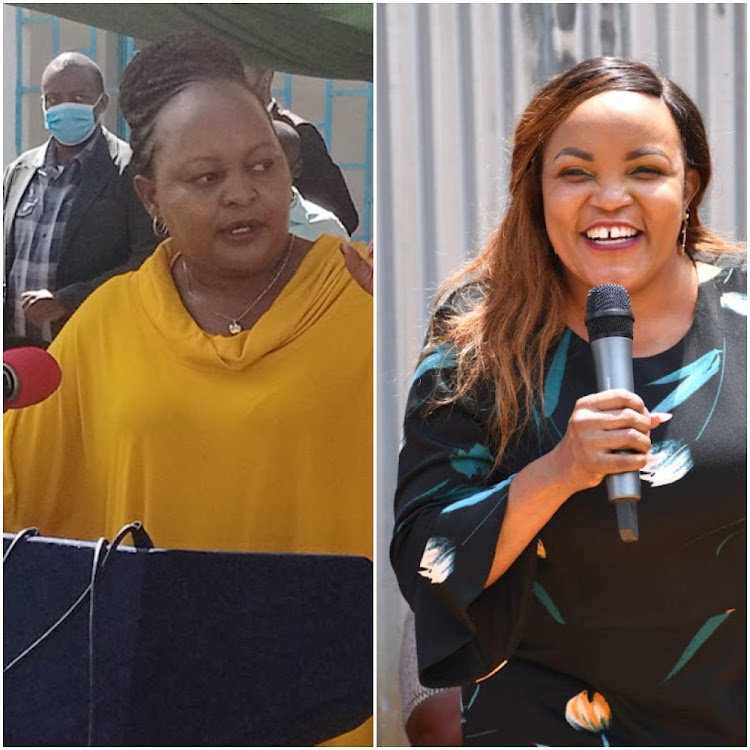 A political showdown is looming, as Deputy President William Ruto is set to visit Kirinyaga county on Sunday.

His visit comes in the wake of a show of political might that has over the last couple of days ensued between Kirinyaga Governor Anne Waiguru and Woman Representative Wangui Ngirici.

The bruising political jostling between the two women leaders that has put Kirinyaga into focus, comes after the entry of Waiguru into the UDA camp.

Both leaders who have been political rivals are eyeing the governor’s seat on the UDA ticket in 2022.

Ahead of Ruto’s visit, political battle lines have been drawn as each of the contestants have since declared themselves as hosts and ready to flex their political might during the event.

Ruto is set to attend a church service at ACK Kianyaga prior to a meet the people tour at Kianyaga, Kutus and Kerugoya towns.

Says she will not be intimidated, simply because she joined UDA after Ngirici.
Counties
2 months ago

Over the past one week both camps have been mobilising their grassroots supporters and impressing upon them to show up in large numbers during the DP’s visit.

Through their teams, both have also published posters with both their images and that of Ruto which have been  doing rounds in various social media platforms.

Waiguru on Thursday facilitated over 300 boda boda riders who made rounds in a considerable number of areas across the county brandishing posters to welcome the DP as they shouted Waiguru’s  2022 elections slogans. 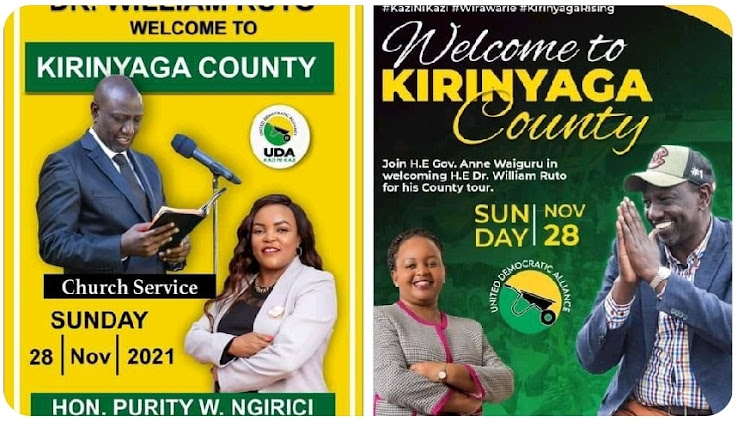 Later in the day, the governor hosted them at her official residence in Kagio where she impressed upon  them to show up on Sunday in large numbers.

She said she can’t wait for Sunday to host the DP whom she said she believes will form the next government.

While hitting out at Ngirici, the county chief noted that no individual had the monopoly of a national  political party irrespective of playing a key role in building it.

“The party does not belong to an individual, it belongs to wananchi. Much as you helped in building it from scratch, that is not to mean you lock people out. We need to grow the party by bringing everyone on board including all our competitors.”

Waiguru  said her decision to join UDA was informed by the electorate.

DP Ruto caught up in Waiguru and Ngirici supremacy war

Showdown looms as rivals Waiguru and Ngirici are to attemd DP Ruto events.
News
1 month ago

On the other hand, Ngirici who has been missing in action in recent Ruto rallies and meetings, reiterated that she shall be the host during DP’s ACK Kianyaga’s  visit.

Speaking on Friday in Mwea, Ngirici said she in the company of Gichugu MP Gichimu Githinji extended the church invitation to Ruto in May after he played a massive role in its development.

“His pending visit to the church  dates back in May when Gichimu and I  were sent over to him  by the church vicar requesting him to be a guest of honour during its consecration ceremony for his enormous contribution in its development.”

"Therefore I personally shall be there as a host, one of the guests of honour and as a mother’s union member which is a faction of the ACK church.”

Ngirici  has equally reiterated that she is going for nothing less  than the governor’s seat in the 2022 election as she has already made up her mind.

On her political future in UDA, the county MP said she still is in the party as she continues to pick some vital lessons for the mistakes she has  made over the course of her  political career.

Moreover she added that politics requires  one to be cautious and tactical and as a result, should she chart a new political path she will let the nation know.

“I’m going for the Kirinyaga governor’s seat and irrespective of the political direction I take in the future ,I believe I have a huge support base on the ground  which I can rely on .”

“All In all, as a politician every day is a school day. I’m still in the learning process and my eyes are steadily being opened to truths  like you should not immerse both feet and  give your all into a course but instead should test its depth with one foot so that you can escape should danger call.”

Speaking to a group of boda boda riders in Wanguru stadium on Friday, her political activist husband Andrew Ngirici urged the riders to show up overwhelmingly to Ruto ‘s event as he warned that his camp shall not allow outsiders to dictate to county residents on whom to choose.

“We Kirinyaga residents will not entertain external intrusion. We are wise enough to know whom to elect and whom to reject. Those planning to force down our throats some of the unwanted leaders will have themselves to blame for we shall not let them.”

With the event less than 24 hours away, all eyes will be on Ruto as he is expected to give direction on both candidates who have declared support for him.

President Uhuru Kenyatta in the 2017 election equally found himself in a tight spot on whom to support after the then Jubilee gubernatorial candidate Waiguru and Narc Kenya party leader Martha Karua supported his presidential re-election bid.