JP leaders from Kirinyaga hits back at Waiguru for attacking Kibicho

They have asked her to apologise for her remarks.

• The Jubilee Party faction defended PS Kibicho saying that the governor has no moral authority to dictate to the president on which  state official to appoint or sack.

• Governor Waiguru on Thursday joined the UDA bandwagon in agitating for the firing of PS Kibicho for participating in politics. 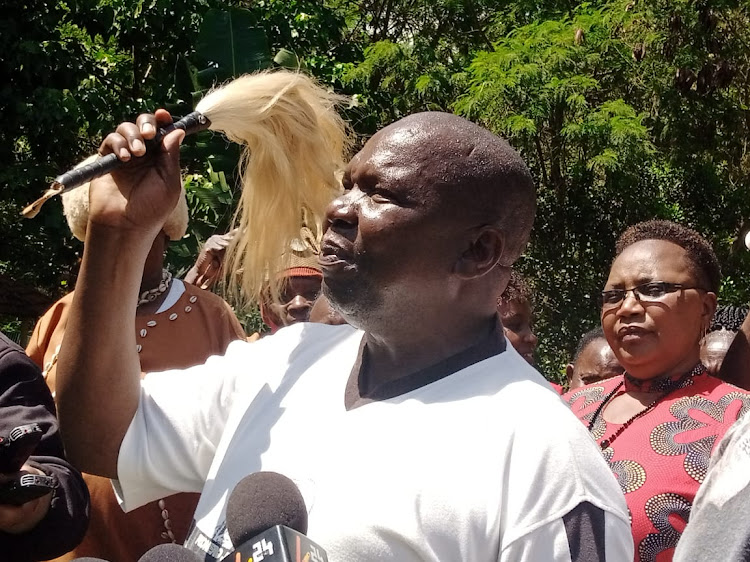 A group of Kirinyaga County leaders affiliated with the Jubilee Party has launched an onslaught speech directed to Governor Ann Waiguru for proposing the removal of Interior PS Karanja Kibicho.

This is after governor Waiguru on Thursday joined the UDA bandwagon in agitating for the firing of PS Kibicho for participating in politics.

The UDA brigade was in Embu County on Thursday to popularise the party's bottom-up economic model as well as Deputy President  William Ruto's presidential ambition.

In her advice to the president, Waiguru urged him to fire Kibicho for neglecting his work and participating in politics.

She went further in advising the president to replace Kibicho with other appointees from the county as the county was without shortage of competent leaders.

However, Speaking on Friday, the Jubilee faction led by county party chair Muriithi Kang'ara, fiercely defended Kibicho saying the governor has no moral authority to dictate to the president on which state official to appoint or sack.

In addition, he said that President Kenyatta has positioned Kibicho in the interior ministry docket as he is qualified and competent.

"We want the governor to keep off Kibicho’s matters and instead channel her energy in developing the county. If there is any sacking to be affected by her, it should be confined to the county level."

"We revere PS Kibicho who hails from our county and we have confidence in his ability to serve the nation. He has diligently served the nation under both the Kibaki and Kenyatta administrations, tasks he has accomplished with dedication and competence."

Owing to his track record, Kang'ara said Waiguru should push for the promotion of Kibicho instead of fighting him in political rallies. 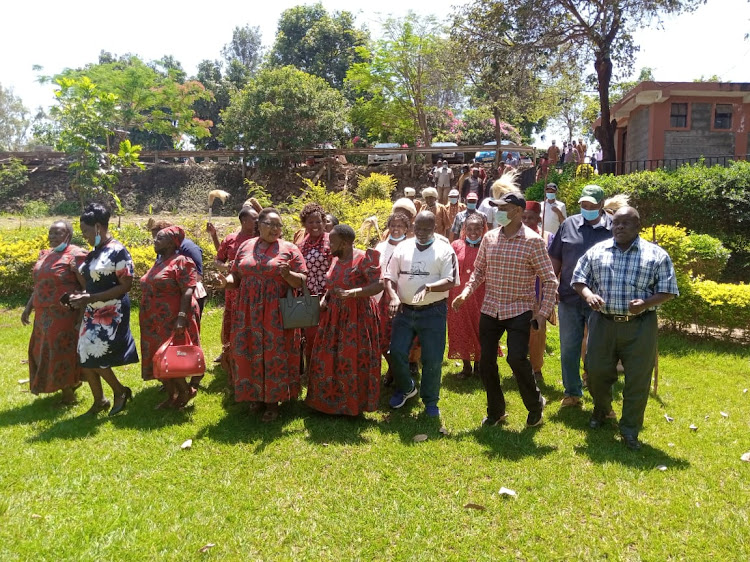 Kirinyaga Jubilee chair Muriithi Kang'ara join in a jig after leading a brief meeting with Key leaders of the jubilee party and other leadership factions from the county
Image: WANGECHI WANG'ONDU

Further, he noted that Kirinyaga county has had a lot of development projects to reap from, all thanks to Kibicho's influence in the national government.

"He is refined and has vast experience as a state official and as such, deserves a promotion to the position of a cabinet secretary. That is what we  have expected our governor to advocate for all along.”

The party's county secretary Jecinta Muthee termed Waiguru's utterances as unfortunate and betrayal to her own county.

She noted that as the county chief, she ought to be at the forefront in pushing for the appointment of more state officials from the county rather than campaigning for the demotion of those currently assigned with jobs.

In addition, she thanked the president for trusting PS Kibicho to work as a senior state officer in his administration saying he has been key in implementing programs that have resulted in the stability of the nation.

"Through his effort, for example, the sale of illicit brews has drastically reduced and our youths have started becoming productive members of the society."

Her sentiments were echoed by Kirinyaga's Kiama Kia ma leader Mwangi Ndung'u who castigated Waiguru for taking a swipe on Kibicho while in a foreign county. He noted that should the governor be discontent with Kibicho's leadership, she ought not to have discussed it outside the boundaries of the county.

"It is very unwise to fight one of your own in another county. If there exists bad blood between you two, then it should be wise to call for mediators and resolve your differences at home."

Diana Wanja, the county chair for Maendeleo ya Wanawake urged Waiguru to apologise for her remarks.

"Why are they only directing the attack to Kibicho and not to state officials who hail from their counties? We want to advise the governor to be on the watch as much as she dumped jubilee for UDA."