Woman Rep Ngirici did not join the governor and her team at Ruto's residence.

• County woman representative Wangui Ngirici who has been a loyal supporter of UDA however did not join the governor and her team at Ruto's residence.

• Waiguru was accompanied to the DP's official Karen residence by over 20 MCAs who also officially joined the party. 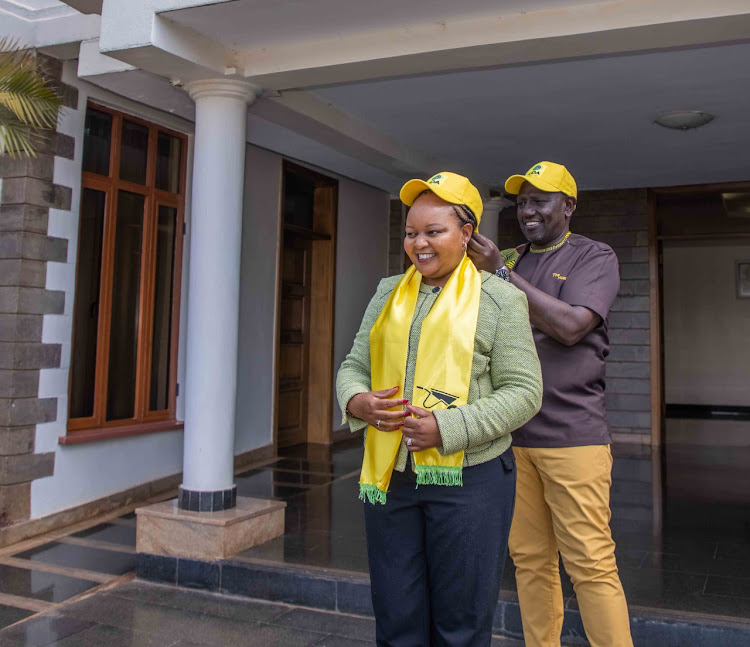 The guessing game is finally over and the die is cast over Kirinyaga Governor Anne Waiguru's political stand and the outfit she shall use to defend her seat in 2022.

Waiguru was accompanied to the DP's official Karen residence by over 20 MCAs who also officially joined the party.

County woman representative Wangui Ngirici who has been a loyal supporter of UDA however did not join the governor and her team at Ruto's residence.

In her recent events, Ngirici has all along maintained that she is ready to give governor Waiguru a run for her money in the county's gubernatorial 2022 race.

She also said that she is not afraid to face her in the UDA nominations.

As a result of this development, a section of county residents spoke to the Star and weighed in on the matter.

"She said she was keen in 'listening to the ground' and we as her employers told her to join UDA and she has finally complied," he said.

"We now are waiting for her scorecard giving details of the work done over the past five years she has been at the helm of the county government's leadership and her next five-year manifesto."

He also urged all county political competitors in next year's polls to maintain peace and sell their agendas with decorum.

"The governor's seat will be a contested one in our county and we look forward to a peaceful campaigns season. Let all contenders sell their agendas in peace and we are all ready to listen to them," Kamau added.

Waweru Kariuki, a trader in Kutus said the governor's new stand didn't come as a surprise as she had started exhibiting signs of jumping ship.

"I expected the governor to join UDA because everywhere she went she would ask the people the best political outfit they would prefer her to Join while seeking for re-election upon which the people would overwhelmingly respond UDA," he said.

"Secondly, when she emphasized that Jubilee needed to be revamped and that it would be impossible to clinch her seat using the party, that's when it dawned on us she was ready to join UDA."

Kariuki urged all Kirinyaga residents to give ears to all the candidates who will approach them and thereafter make wise decisions on who to elect.

"The suitability of the winner will be dependant on our votes. We, therefore, advise all candidates to exercise political tolerance and be at the forefront in preaching peace and shunning divisive politics."

He also advised the youth to keep off politicians intending to misuse them for their selfish political ambitions.

Wanjiku Muriithi, another resident, said they would go for visionary and development-minded leaders for the position of a governor."

"Most contenders vying for the governor's position have held various leadership positions. I will be going for the one who has immensely contributed towards changing my life and generally improving our county," Muriithi said.

Kevin Muturi from Kagio said that the governor was spot on in joining UDA as that was the most popular party in the county.

"Waiguru has worked out her political calculations and I'm glad she got it right. The ground has stood with DP Ruto all along and that shall be evident through votes in next year's polls," Muturi said.

"We now can not wait for her to come back as she hit the ground running with her scorecard and what she intends to do for us once she assumes the seat."