Dairy farmers told not to rely on rains for livestock feeds 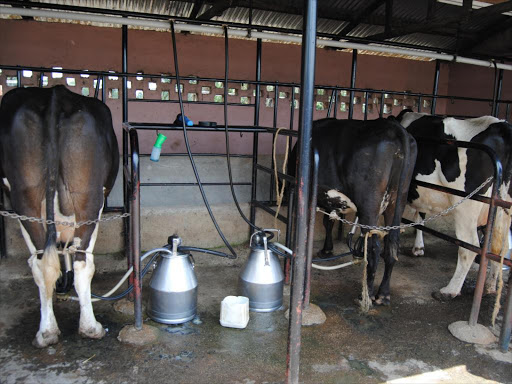 Dairy cows in a shed /FILE

Small holder farmers are yet to fully adopt feeding practices that are less reliant on rain, the Kenya Dairy Board has said.

The board is, however, working with industry stakeholders to ensure that farmers adopt best dairy feeding practices to avert shortages experienced during the dry season.

“The sector is generally small scale holder and because of that it is more rain dependent,” KDB managing director Margaret Kibogy said yesterday.

“We have been doing a lot of education through stakeholders and partners to ensure farmers both big and small scale are able to conserve animal feed so that they are not affected by poor rains.”

Kibogy noted that milk production during the prolonged drought that started December resulted in a 50 per cent drop in processed milk output due to overreliance on rain.

She noted that the government had been supportive to the dairy sub-sector which contributes an estimated 4.5 per cent to the national gross domestic product.

“Through the 2015 Strategic Food Reserve Fund the government set aside Sh500 million to be used to convert excess milk into powder which the market has been using to stabilize the milk supply between December and May,” Kibogy said.

Treasury CS Henry Rotich in a gazette notice presented on May 11 said imported milk powder would be temporarily exempted from taxation for a period ending July 31.

Post a comment
WATCH: The latest videos from the Star
by CYNTHIA ILAKO @LadyKanyali
Counties
09 June 2017 - 02:00
Read The E-Paper