The newly launched Bypass is part of the Athi River-Namanga-Arusha-Holili/Taveta-Voi road. 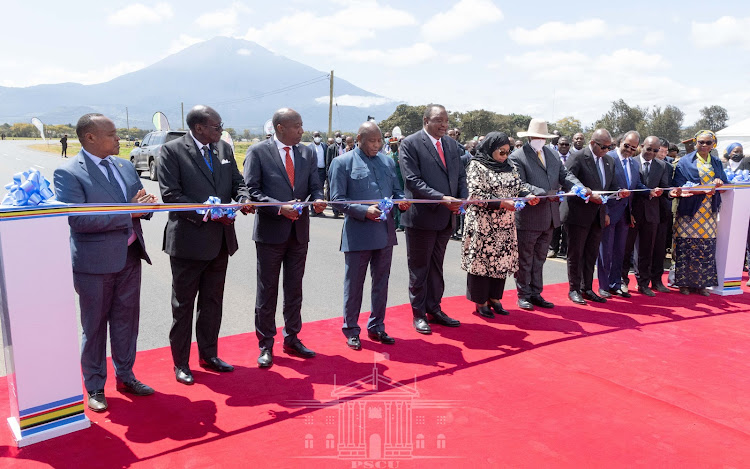 East Africa Heads of sSate on Friday commissioned a Sh26 billion Arusha bypass that is expected to enhance trade between Kenya and Tanzania.

The 42.2-kilometer road which is funded by the African Development Bank (AfDB) is part of the regional Arusha-Holili/Taveta-Voi road that links northern Tanzania to the Kenyan port city of Mombasa.

The project is expected to narrow the Infrastructural gap between Kenya and Tanzania and enhance intermodal connectivity.

It is the first phase of a project that was constructed to decongest traffic in Arusha, where the EAC headquarters is located, and Moshi towns in Tanzania, in addition to promoting intra-regional trade.

Speaking at the event, President Kenyatta said that infrastructure development was key in driving development just like peace and security.

He further noted that when countries come together and pool resources, they can overcome all barriers to the development of an economy.

“I urge all leaders in our East African region to fast-track the implementation of programmes and projects that will deliver quick results for the benefit of our citizens,” Kenyatta said.

Tanzania’s President Suluhu Hassan said that the multinational road would also boost the tourism industry even as it promotes trade.

She urged those with access to the infrastructure to make use of the termed emerging opportunities to uplift themselves and their businesses in the process of spurring economic growth.

The investment is linked to the yielded trade results in the region, for instance, the transit time from Mombasa Port to Kigali through Uganda has reduced from 18 days in 2014 to an average of 5 days in 2021.

During the summit, it was acknowledged that the EAC has already constructed 13 One-Stop Border Posts across the region, all of which are now operational.

Citizens using the facility were asked to take care of such infrastructure projects against harmful habits that destroy roads.

At the summit, it was noted that Africa requires more than $170 billion (Sh20.1 trillion) to close the huge infrastructure gap between it and other continents.

It was also noted that Africa’s current public expenditure on infrastructure development is estimated at 3.5 per cent of the Gross Domestic Product (GDP) as compared to 4.7 to 6.5 per cent for developed countries.

Cargo business yet to recover from covid-survey

It is attributed to disruptions to the supply chain caused by global lock downs that were imposed.
Business
6 months ago

Accord between Kinshasa and Kigali is crucial to East African stability

Kenya, in particular, has shown great interest in tapping into the 87 million-strong market of the DRC
News
6 months ago
Post a comment
WATCH: The latest videos from the Star
by ALFRED ONYANGO
Kenya
25 July 2022 - 20:00
Read The E-Paper