This came as overall economic growth contracted by 0.3 per cent.

•Manufacturing sector's real gross value added contracted by -0.1 per cent, from a growth of 2.5 per cent in 2019.

•Kenya's total volume of trade during the year dropped to Sh2.29 trillion. 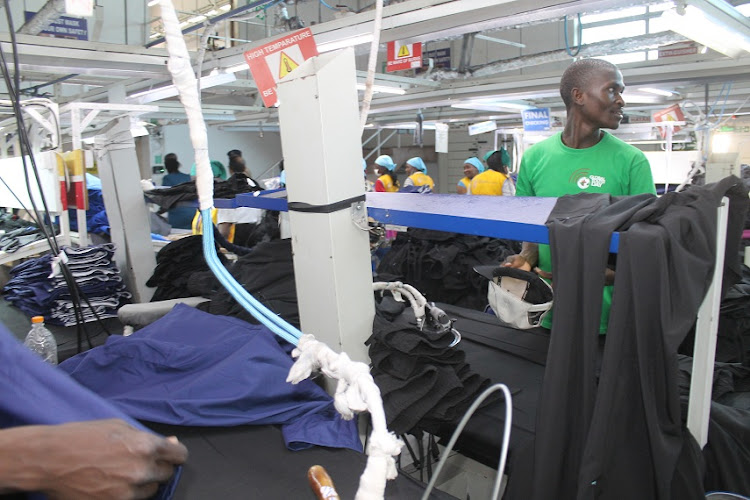 The manufacturing sector and international trade performed dismally in 2020 as the economy took a hit from the Covid-19 pandemic, contracting by 0.3 per cent.

Manufacturing was adversely affected by a general slowdown in economic activities, largely due to measures instituted by the government to curb the spread of Covid-19.

These measures resulted in reduced demand for manufactured products locally and internationally the Economic Survey 2021 released yesterday indicates, with the sector's real gross value added contracting by -0.1 per cent, from a growth of 2.5 per cent in 2019.

This came as formal employment in the sector decreased by 10.3 per cent to 3.6 million persons in 2020.

Similarly, the number of local employees in Export Processing Zone (EPZ) enterprises dropped by 7.7 per cent to 55,736.

“The value of export of articles of apparels under African Growth and Opportunity Act (AGOA) decreased by 8.3 per cent to Sh42.3 billion in 2020 mainly due to inadequate supply of raw materials and the market lockdown in the USA,” it states.

Kenya's total volume of trade during the year dropped to Sh2.29 trillion out of which the value of imports were Sh1.64 trillion while that of total exports were Sh640 billion.

The manufacturing sector's performance was mainly supported by sugar, tea and cement production, the government data shows, which grew by 36.9 per cent, 24.1 per cent and 21.3 per cent, respectively.

While the government is hoping the manufacturing sector will rebound and support the country’s economic growth, the industry is currently reeling from heavy taxation and high cost of doing business, which is threatening its growth.

At least nine new taxes and levies have been introduced by the government in the current financial year.

Plant resins are valued for the production of varnishes, adhesives, and food glazing agents.

The government has also imposed a Sh200 per kilo excise tax on locally produced white chocolate, excise tax on imported fertilised eggs for incubation or hatching and a 16 per cent VAT on the supply of liquefied petroleum gas (LPG), including propane.

Further, the government is taking 16 per cent VAT from clean and improved cook stoves.

It has also imposed higher specific import duties for some categories of timber products and provision to limit interest to be deducted to a maximum of 30 per cent of Earnings Before Interest Tax, Depreciation and Amortisation.

“Export earnings of horticultural products, tea and titanium ores and concentrates contributed to the increase in domestic exports by 10.6, 14.8 and 20.5 per cent, respectively,” the survey by Kenya National Bureau of Statistics notes.

Expenditure on principal imports of petroleum products, industrial machinery and road motor vehicles declined from a combined value of Sh657.2 billion in 2019 to Sh514.2 billion in 2020.

Consequently, expenditure on imports declined from Sh1.8 trillion to Sh 1.6 trillion in 2020.

The overall contraction in economic performance was attributed to disruption in labour supply brought about by restriction of movement and social distancing meant to contain the spread of Covid-19, and reduced demands for goods and services.