Foreign cash inflows hit the highest point in June and May last year at Sh27.11 billion and Sh25.81 billion respectively.

• Since its introduction in 2016, the tax amnesty period has been extended twice.

• Foreign cash inflows hit the highest point in June and May last year at Sh27.11 billion and Sh25.81 billion respectively when the amnesty scheme was first expected to close. 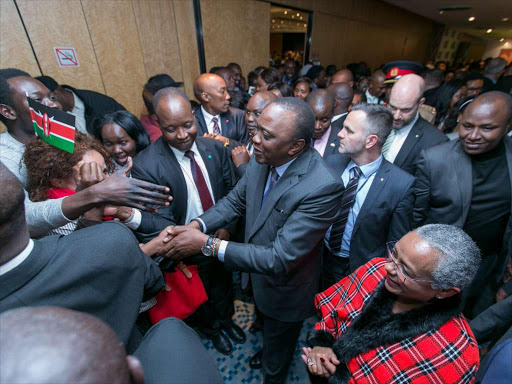 President Uhuru Kenyatta and First Lady Margaret Kenyatta get a warm reception from Kenyans living in Germany during a diaspora meeting in Berlin, Germany
Image: PSCU

Kenyans in the diaspora continued to take advantage of the tax amnesty granted on foreign income as cash inflows hit $664.9 million (Sh67.23 billion) during the first quarter of the year.

“North America remained the main source region for the remittances, accounting for 53 per cent of the total remittances in March,” CBK said in its weekly bulletin.

The Tax Procedures Act was amended in 2016 with the introduction of Section 37B, which granted amnesty on foreign income that had been earned on or before 31st December 2016 and was subject to taxation in Kenya.

This was later amended on April 3, 2017, extending the deadline to allow full amnesty provided the foreign income was declared and funds realized were transferred to Kenya no later than 30th June 2018.

The amnesty was further extended to 30th June 2019, despite concerns that it would lead to inflows of illicit cash including proceeds from corruption.

According to analysts at PriceWaterhouseCoopers, the government’s decision to extend the deadline date twice is a clear indication that the level of uptake thus far has been below expectation.

“It remains to be seen if this new extension will result in a flurry of new applications before the June 2019 deadline,” the report by PWC indicated.

CBK data shows foreign cash inflows hit the highest point in June and May at Sh27.11 billion and Sh25.81 billion respectively when the amnesty scheme was expected to close.

“It’s not normal to see such growth in remittances ... especially not the rate of growth in the last two years. It looks like something is being recorded that was Un-/mid-recorded before,” Renaissance Capital global chief economist Charlie Robertson said.

PwC analysts however raised questions over the wording of the law on whether or not the remitted funds need to be invested in the country for a specific period of time.

“The present amnesty neither defines specific minimum investment period nor does it set out punitive measures for failure to maintain funds in Kenya,” the report stated.

One of the benefits of the amnesty for foreign income is that it enables taxpayers to wipe their slates clean before information can be exchanged between tax authorities and financial institutions globally.

Where one is unable to repatriate funds within the amnesty period, applicants have been granted a five year period to remit the funds subject to a penalty of 10 per cent on remittance.

Cash sent home by Kenyans living abroad almost doubled during the first quarter of the year compared to the same period last year. In the ...
Counties
4 years ago
Post a comment
WATCH: The latest videos from the Star
by CYNTHIA ILAKO Business Writer
Kenya
09 May 2019 - 05:00
Read The E-Paper